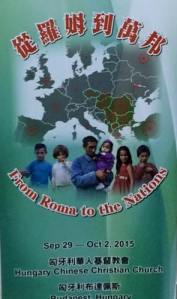 In the last post in this series, we were thinking about the deep feeling expressed by several Chinese believers that they “owed a gospel debt” to the Roma of Europe. Letting that concept percolate, we can think of at least two reasons why we who are Christians of European extraction, who have been involved in gospel work in Europe for decades, might want to consider that OUR gospel debt to the Roma is even greater.

The first touches on our own complicity. One of the reasons the Chinese get on so well with the Roma is that they, like few others on the scene, have NO history of oppressing or marginalizing them. With us, however, it is different; we DO have to deal with an element of complicity in that we have scarcely begun to challenge the centuries-long systematic spiritual abuse of the Roma peoples. From the closed doors and hearts of our churches, to our silence as Roma are scapegoated, to our willingness to stand silent as they are blamed for the economic, cultural and spiritual chains which have been forged over generations… we have every reason to acknowledge the “debt” we have to them in regards to our miserly approach to sharing the gospel with them.

The most jarring case in point would have to be the suffering of Roma in the holocaust, the Porrajmos (the Devouring). Historians estimate that the Germans and their allies killed at least one out of four of all European Roma. The horrific numbers involved are still uncertain… starting from the standpoint that no one knows what the population of Roma in Europe was BEFORE the holocaust (and they have a 2M person “margin of error” today!) Unlike the records of the extermination of Jewish victims (often meticulously recorded), it appears that often, those running the killing machines didn’t even bother to COUNT the Roma victims. There were certainly more than .5M, likely up to or exceeding 1.5M Roma who died in the Porrajmos… while the voice of the Christians of Europe remained inaudible.

There is scarcely a whimper in the historical record of Christian churches in Germany raising a protest, let alone standing in the gap for those being “staggering to slaughter” (Prov.24:11). As if that were not sufficiently inhuman, even after the Germans began to come to grips with what they had done to the Jews, and began to apologize, make concrete changes, reparations, etc. they did the exact opposite with the Roma.

During the initial hearings on war crimes restitution claims in 1950, there were statements like this (from one provincial Interior Ministry): “it is important to keep in mind that the Gypsies were persecuted under the National Socialist regime not for any racial reason, but because of their criminal and antisocial record.” As far as into the early 70’s the Bonn Convention took advantage of this line of reasoning to justify NOT paying reparations to Roma, claiming that they were victimized during the Nazi era SOLELY for “security reasons.”!

By the time the (blatantly) racist reasons for what had been done were acknowledged, there literally were no survivors with which to reconcile.

We need to be willing to look at these chapters of history (as the church) and come to grips with what they mean to us today, how we have contributed to make things the way they are and what we can do to change it. One of the beginning points is telling the stories involved.

But if our Chinese brothers and sisters are acknowledging a “gospel debt” to the Roma, how much more do we!

Secondly, this concept of “gospel debt” is intensified within me in light of my commitment to holistic ministry – I have been a long-term advocate for seeing “doing justice” as an essential element of living out the gospel. Pastor Wang sees the “payment” of this gospel debt as being effected by the proclamation of the gospel message to Roma.

However, we believe that the mission of the church (and the holistic expression of the Gospel) comes into direct opposition to injustice. We know that the Roma have been and continue to be victimized by deep and systemic injustice. The gospel compels us to address and confront the idols on whose altars the Roma have been sacrificed, to break the chains (spiritual and cultural) that have been forged over centuries and which still bind Roma hearts and communities.

Thus, I acknowledge Pastor Wang’s gospel debt to the Roma as my own. And once I see the debt, I recognize that interest on our debt has been compounding as decades of complicity and silence have passed. We who believe that “bringing the gospel” entails MORE than just preaching a verbal message need to recognize a “justice debt” to be repaid. To paraphrase Paul in Rom. 1.14-15, “We owe a debt to the Roma, that is why we are so eager to see the chains of injustice that bind them broken in and by the name of Jesus.”

The time has come for this debt to be repaid. And it will be more than a settling of accounts. As we see more and more of how the Roma seem to fit into God’s plans, we can only conclude that “investment” in the Roma will reap massive spiritual reward in the economy of the Kingdom.

This is Part Three of a series. The first post is here. The series continues here.