I’ve held this in for a while, spoken and written around the edges of it, and tried to humbly advocate… but, like Jeremiah, it’s “in my heart like a fire shut up in my bones. I am weary with holding it in; indeed I cannot.”

There are people among us labelled “DISABLED.” That’s NOT a problem of people with problem bodies or brains. It’s a problem we – all of us considered together as “society” – have with certain forms of difference. “Disability” comes from attitudes and judgments that differentiate some from others because of certain physical or intellectual impairments… and allow those differences to be “disabling” by passively or actively denying access to “normal life” to those so labeled. That in itself is a justice issue (we’ll talk later), but I’m thinking of something I love deeply: the body of Christ. 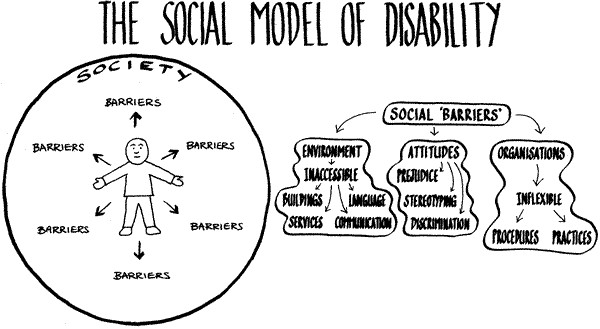 God is calling all to new life in Jesus, in whom we are “baptized by one Spirit into one body.” And some members of that “body” “seem to be weaker” or more insignificant… but they really aren’t. If they actually were, we’d read, “Some members of the body ARE weaker…” Paul writes (to the church!), “There’s an assessment being made… and it’s not valid!” That’s the very same assessment we make when we tell people with disabilities (directly or through the ableism that shows in what we say and how we say it, where and how we hold our gatherings, the things we demand and assume of people), “We don’t need you!” (1Co 12:21). Inclusion is not optional! But there’s more…

Here’s a proposition – dispute it if you will, but I stand by it: God has prepared and gifted (at least some) people with disabilities not just for participation but for leadership roles in local churches and Christian organizations. Honoring such calling and gifting strengthens the body, gets all parts of Christ’s body into working service.

Every member is gifted for some form of service. If we’re not fostering the spiritual growth and ministry effectiveness of people with disabilities, we are actually disabling the body of Christ.

Leaving the barriers of the status quo in place, we might think we’re avoiding “dealing with disability”… But, in fact, we are creating a disability… in ourselves! A church that does not significantly recognize, affirm and employ the “indispensable” gifts of members with disabilities is at risk of being a “disabled church.”

This is a problem for the church everywhere – both in Europe, where I serve, and in the US. And until we – in our individual congregations and as a global body – recognize what people with disabilities bring to evangelism, discipleship, and church leadership roles, we are growing weaker, not stronger.

The one time I saw Joni Eareckson Tada in person, she said, “God is up to something big – He is using people with disability to wake up the church.” Well, I’m awake!

But there’s more… As a mission leader, I want missionaries with disabilities heading to the field. People with disabilities are de facto considered “not qualified” for missionary service. I totally disagree. The Great Commission calls us to take the gospel to everyone, everywhere. However, this “to all people” has often (explicitly or functionally) been employed as if it meant “all people groups” or all ethnicities.

But all people means all people, doesn’t it? This must include the over 1 billion people on this planet who are living with disabilities. Most of whom are NOT being reached. Do you think God might call a person with a disability to participate in that pursuit? Instead of (directly or implicitly) putting barriers before them, we should be proactively seeking and raising up not only disciples but LEADERS and ministers and missionaries with disabilities. We’re a suffering church, called into a suffering world – let’s never forget that. And our brothers and sisters with disabilities offer spiritual insights into physical, emotional, and social suffering that we desperately need.

It’s not going to happen overnight. But it has to happen. And, insofar as it’s up to me, it starts now. It starts by looking around and asking someone with a disability, “What would be better?” And starts by building honest, human relationships and friendships with people with disabilities. Maybe you don’t have any friends with disabilities. Start by changing that.

If there’s only one thing that I can help accomplish with the rest of my days on this ball of confusion, that’d be it right there.