Eszter Dani is a pastor in the Hungarian Reformed Church. We met in Budapest at the Roma to the Nations consultation in October. She is bright, affable, articulate and energetic. In the course of conversation, we found that we had a few things in common: a passion for the Roma people, a long stretch of cross-cultural ministry service in Ukraine (she having served as a pastor in trans-Carpathian Ukraine during much of our time of church planting in Kyiv). And we both love Chicago: she had spent some time (which has greatly impacted her) in Lawndale, learning about the values and practices of Christian Community Development from people like fellow-Wheaton grad Wayne “Coach” Gordon and John Perkins.

She has done good things things that many of us only wonder about. She has really served “in the trenches,” fighting the good (spiritual) fight on behalf of a particular Gypsy settlement there in Ukraine. She spent nine 9 years of faithful prayer, pastoral service and concrete, compassionate ministry to the poor and sick. This village had about 350 year-round residents, only a handful of which were over the age of thirty. The statistics tell a grim story: unemployment: 95%. Illiteracy: 90%. Residents with tuberculosis: 50%. The village was overpopulated, served by bad roads, had no running water (and what was available was borderline toxic), dangerous electrical service, many people in prison. 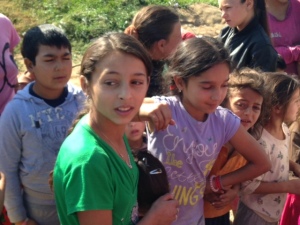 Even those who “succeed” were prevented from success: Eszter told of one resident coworker with a desire and aptitude to study – someone who could actually “break out” and “get somewhere.” The regional authorities would take one(!) nomination from the local school administration for university study. However, each year in upper school, the talented Roma student was passed over. Despite her excellent performance, it was understood that the year’s “pick” would be given to a Hungarian student (even an inferior one) as opposed to being “wasted” on a  Roma. As a result, the young Gypsy never left the “shkola”… and her Ukrainian teacher received benefit by taking credit for the precocious young Gypsy’s higher test scores.

The level of prejudice is almost as high in the church as it was in society at large. Eszter’s church seemed to be doing all the right things, striking the right “balance.” They pursued evangelism, home Bible studies, did counseling. They took a holistic approach: digging wells, providing goats, agricultural projects, building “wash-houses” where villagers could shower and do laundry. They provided teaching (pre-school programs, camps, sending kids into the village schools). The parents would have to carry the kids to the bus stop on their backs in order to keep the filth and dirt of the village and roads off their school uniforms. The church sought above all to empower leaders to reach kids through ministry, teaching, evangelism, church planting, writing their own songs…

After nine years, what results were seen? There was tension between the leaders; there had been no actual net “job creation”; early marriage still persisted; alcohol abuse remained high – even among church leaders. After almost a decade, they had nothing but disease, deaths, projects failing left and right. They had approached everything with a “good heart,” had implemented the best ideas, and lined up the right resources.

So what was the problem?

Eszter replied, “The problem was that all these things were OURS.” So now what?

This is where the Chicago connection comes in. What she observed in Lawndale (through the Christian Community Development emphasis there) gave her a fresh perspective. She has now become a strong advocate for applying “CCD” principles to Roma ministry:

1) RELOCATION: ministry is undertaken by those who live among the people. It is truly incarnational. Gypsy problems are approached not as “yours” but as “ours.” Those who serve must take a real, personal stake in the community’s problems and the development of solutions to them.

3) REDISTRIBUTION – working for justice, for a just distribution of resources. For whole-community skills, relationships, resources are geared toward empowerment which, in turn, can lead to healthy community.

4) LEADERSHIP DEVELOPMENT – don’t do for others what they can do.

5) LISTENING TO THE COMMUNITY. This is not just about their needs and weaknesses, but their desires, dreams, thoughts, solutions. We accept the existing “felt needs” (particularly for dignity) and develop “asset-based” responses.

This is obviously no “quick-fix”… certainly not when the “problem” in view covers an entire continent and millions of people. Learning to build on the strengths IN a community doesn’t come easy. And it isn’t easy when a community is as extremely impoverished and marginalized as the Roma are. It seems hard to find anything upon which to build.

But there is something. I’m convinced of it. And the process all hinges upon relationships in which trust is built.

We cannot move into one village with an idea that we can build upon the “success” of a previous one… other than through individual relationships. The bottom line: going about trying to DO things for the Roma will bring failure. Doing things WITH the Roma is better.

However, the “place” where trust exists is located in the “social space” between these two communities (European and Roma). In front of each community is a very high and thick wall of separation… Europeans have to get over THEIR wall of prejudice, racism. The Roma have to “get over” their deep mistrust.

So who goes first?

Can you see how important these values are – not only for working with the Roma in Europe – but also in working for the healing of the land in which this old Mill Pond stands?