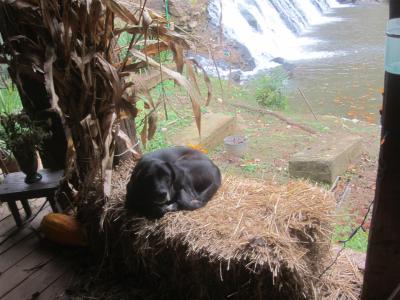 Perhaps this is just an element of how things are done in these parts that’s making me crabby. Maybe this phenomenon isn’t manifested elsewhere… but I doubt it.

Whether or not people apologize too often, or not often enough, is not at issue (at least not in today’s blog). I just know that personally, due to a number of factors – being new in the area (having not been here several generations), not knowing local customs, my general tendency towards aloofness, or just basic humanity – I find myself making apologies sufficiently often to get a sense of how they function in contemporary discourse.

As often as not, the typical response is something along the lines of “It’s all good,” or “Don’t mention it,” or “Aaahhh, it’s nuthin’,” often with a wave of the hand that seems distinctly dismissive. If pressed, the person might respond with something like, “Oh, you don’t need to apologize.”

We started making note of this a while ago, and none of us here on the porch can remember the last time we heard anyone actually accepting an apology.

What does “It’s all good” even mean? It’s not connected in any way to “I forgive you,” which demands a recognition and agreement that everything is not good (or won’t be until something wrong has been absolved).

Is it an expression of stoicism… the philosophy that the wise person lives in harmony with divine Reason (or Fortune) that controls everything that happens and are therefore indifferent to the vagaries of fate, or to pleasure and pain? I sincerely doubt it.

Frankly, at times it just sounds passive-aggressive. “It’s all good” could be a translucent covering over an internal dialog going something like this: “You already hacked me off once… and I haven’t gotten over that yet, so there’s no way I’m gonna give you the satisfaction of accepting your lame apology…” OK, I don’t actually know what’s going on in anyone else’s mind… but when one is given so little with which to work, it’s hard to know what to think.

Mainly, it sounds like a platitude – a phrase that has been repeated so often that it has lost all rational content (and, frankly, the ability to be interesting). In that case, it’s similar to the ubiquitous “Whatever.” (Actually, we’ve heard them combined on more than one occasion – Q: I’m really sorry… will you forgive me? A: Whatever. It’s all good.)

But apart from the meaning of “It’s all good” (or the lack thereof), I’m wondering about its function. In other words, why don’t people accept apologies anymore?

If you encounter this often enough, you begin to get the feeling that there are at least some people who are not going to accept any apology under any circumstances… That would be the most literal corollary of accepting “It’s all good” to be an accurate description of reality. That apologies in general are just weird or insincere. But that approach – contrary to the whimsical stoicism that the phrase seems meant to convey, is a fairly aggressive stance. Waving off an apology is also a blunt refusal to extend forgiveness – a withholding of something someone else is seeking.

Why would people do this? Perhaps it is because they simply don’t believe in the concept of forgiveness. Why might that be? Perhaps it arises from the discomfort arising from the sense that extending forgiveness to others would expose my own need for forgiveness.

On the contrary, if “it’s all good” then, by extension, I’m good. When it gets right down to it, I can’t afford to give any ground on that. I need to believe, without reservation, that I am good; if I’m not, then I need something outside myself. I need salvation.

This is tragic because – as forgiveness withheld by waving off apologies – grudges simmer, gossip proliferates, alienation intensifies… and reconciliation – the ground of true friendship – is forestalled.