Porches, particular ours at the Mill Pond, are great for spinning stories. Here’s one for today:

A rich and loving yet humble man – the wisest and best under the sun – left a beautiful, fruitful parcel of land and a bag of stones and a little home to his children.… and then went off, heading to a faraway land to do battle and then set up a place from whence he would come to collect his children. The stones were, in fact, precious gems, though the children were too young to understand the economic concepts behind the valuation of mineral commodities. The utensils were solid gold, but gold had little meaning to these simple children. They did admire their beauty, but not any more than they admired the beauty of the little hollow in which their father’s garden sat.

His youngest children (who were only babies when he departed, and scarcely could remember his face, and weren’t sure what in their minds was what they actually remembered or what they had picked up from stories told about him) continued his work tending the family land. However, a day came when an incredibly violent and evil enemy invaded, wreaking havoc on the land, killing many of the people on the father’s property, laying waste the family fields. The devastation was astounding; remaining in place was not an option. So the children set off with what little they had to seek the place where they knew they belonged.

Driven from their verdant homeland, they wandered across the continent seeking, at one level, merely a safe place, a refuge, a place of safety from the surrounding destruction. But they also sought the path that would lead them to their father’s “kingdom.”

As they wandered, they carried in their ragged packs treasures that were more valuable than the entire treasuries of the towns that said they didn’t have enough to share with, to provide for, the refugees. They took abuse and insult for being ragged outsiders who didn’t belong. Yet they traveled on, seeking that place of safety where they would actually see their father’s face, hear his voice, feel his embrace, never sharing that they were in possession of things that – if recognized for what they were by those who were abusing them – would have instantaneously been seen as having inestimable worth and value. Why did they not pull these riches out of their packs to impress the people from whom they were “begging”? Because they didn’t see these stones as treasures of monetary value, but as tokens of their father’s love. The villagers would have called them priceless because of their great value – the wandering children knew they were priceless as well, but in the sense that it made no sense to “put a price on them,” the only value they had was that they were given by their father.

If anyone had recognized the value of the things these ragged migrants carried, the entire story would have been different. But they didn’t know. And, more significantly, they didn’t ask. They saw the external appearance of these wandering children, saw that they were different – so different that they were not acceptable as they were (how would they ever “fit in”?) and so assumed they had nothing to offer.

The migrant kids’ wandering from town to town, when they were carrying enough to BUY the towns that rejected them, seems sadly ironic, even tragic. But perhaps it simply has to be this way. The gifts of the father were not meant to be “cashed out,” but treasured. So the people that were actually the richest in the realm were cast aside, pushed out as little and dirty and ragged and worthless. The villagers congratulated themselves, thinking they did well, protecting the limited resources of their little town from being scattered like pearls before swine. But they missed a great opportunity for enrichment, the likes of which they would almost certainly never see again.

The migrant children continued on, hoping – in opposition to everything the world around them could or would see – that they would make it to their father’s house. To safety. To the place they could call “home.” 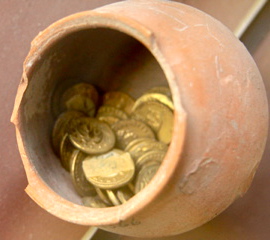 Are these children the migrants “flooding” Europe, carrying the image of God within them? Or us – bearing “treasures in earthen vessels” – in the midst of a world which doesn’t see the value of the things of God?

Or is it just a story?