I visited Maidan just before it was transformed by the massive murderous violence of late February. At that point it was still a (some said desperate) attempt to carve out and define what free society might look like… or else it was a seething hotbed of violent insurrectionist neo-Nazis. Again, what narrative is being told, and who tells it? One place I had to see was Ukrainian House, the narrative of which itself is quite involved.

The building had housed the Lenin Museum until just prior to our family’s move to Kyiv way back when. It had until recent days been a showcase exposition center for art, history and culture. Culturally, it stood all of which Ukrainians are justly proud. 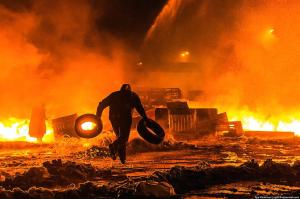 Geographically, it stood at the end of Khreshchatyk, the city’s main drag, on European Square. It was at the north end of this square, which headed up a cobblestone street toward the Parliament and Government Ministers building, were the violent clashes had occurred between government forces

and protestors.
So while you would have been looking at scenes like this…
or this… then this building would have stood behind you.

I wanted to see this building not only because I’d been in it dozens of times. It was a prominent feature in two stories I’d heard recently. One was that it had been overrun by “barbarians” who were carrying explosives and making terroristic threats. They burst into this cultural treasure, set it ablaze, brutally beating those responsible for keeping order and put them to flight.

The other story was that, at times during the past few evenings, shots were heard to ring out in the darkness. Then, a person in the crowd is shot, but not by anyone nearby. A sniper? Another person dies from a gunshot. The word spreads that there was someone shooting from behind them, maybe from on top of Ukrainian House. As the protests against corruption escalated, the people had seen the police and government forces, rather than enforcing any sort of order, had been turned loose to maim people and worse, and to do so not merely “indiscriminately,” but with a special emphasis on people identifying themselves as journalists and medics(!) These forces were now using the former Lenin museum as a barracks/staging area. The people felt they had to stop it. But how was that even possible? They surrounded the place and raised such a ruckus that the police realized they were outnumbered and left… the people formed a “corridor of shame” and let them out, unmolested, as far as I know. They then came in and, among other things, made music in the exhibition hall.

After the police had been driven out, the place was cleaned up and put into the service of Maidan. The headquarters of AutoMaidan, the rolling anti-corruption outfit that was so effective in the early days of the uprising, had their headquarters in one of the old box offices. Perhaps because of their being the target of recent attacks, coming into Ukrainian House was the one place I was actually challenged. I was asked to show my “documents.” Seeing my passport a young guy, holding another one of those wheelbarrow handles, says, “You’re an American?” (the same obvious question I was asked crossing the border the previous time). “Yes,” I responded in Russian (which, had this guy actually been one of those Russophobic Banderist Fascists, could have been a big mistake), “I am. And I came here to tell you that I respect you.” Handing me back my passport, he looked across the square to the burned-out football stadium and answered (in Russian). “For that, I respect you.”

Inside was a beehive of activity remarkable to behold. The nature of what I observed that day betrays which of the two narratives about how this building came to be this way actually has a ring of truth. The circular building’s lower floor had restrooms (which were getting a lot of use, and were in actually decent shape) a snack bar (payment for food, mostly the same salami and butter on bread that were being handed out on the street, seemed optional), and a humming food and water distribution system. People were bringing in bags, sacks, backpacks and carts full of staple foods, bundles of and cases of bottled water. (They sure looked to me like the same mix of people among whom I’d lived for 15 years, not “agents” of any sort of epicurian conspiracy.)  They said that there was enough food to keep the people on the streets for two weeks. Given that an empty Maidan meant defeat, but that many people had come from way outside of town to protest, there was a clear need to see that people were fed in an orderly fashion. That was precisely what the people themselves managed to organize, using, again, a public resource – another building – and their own initiative and the goodwill of literally thousands of neighbors to make it all work.

The circular array of rooms presented a view on the multifaceted nature of this uprising. While constantly having to watch out for the cord or the sweeper which was polishing the marble floors of the lobby and central hall (these were very tidy extremists), one could see all sorts of social, political, educational efforts represented. 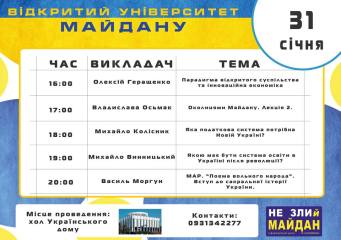 There was even an “Open University of Maidan” that was offering free courses for people. I can honestly say (speaking here of the spirit on Maidan, not necessarily about the political movements that are attached, whether symbiotically or parasitically remains to be seen, to the “narod”) that this is not about grabbing power. It’s about building the spirit. I read over the day’s talks at the “Open University” as I listened to one after another revolutionary take a turn behind a piano, each seeming to have something more beautiful or moving than the previous to play.

“Paradigms of open society and innovative economics” “The ‘Suburbs’ of Maidan, Lecture 2” “What sort of tax system will the New Ukraine need?” “What sort of educational system might we have after the revolution?” “Of the poem of the wave of a nation: Introduction to a sacramental history of Ukraine”

This – all this – in the face of such cynical opposition, in the context of decades of fatalism and indifference… moved me to tears. I knew then, and know now, that such a people cannot be repressed forever.

And where else could you experience something that touched the soul and spirit so deeply, only to walk outside to be asked to get your picture taken next to a dude in a panda suit?