The news hasn’t changed much since I left Kyiv last week. It remains a tense standoff, without clear directions as to how to defuse it, with prospects for resolution developing along vectors that include splitting apart the country, massive damage and loss of life, civil war or financial and/or governmental collapse. Meanwhile, the country muddles forward, blanketed in a nearly constant stream of news with overtones both hopeful and sinister.

There is no shortage of pundits willing to explain (whether in short blurbs or lengthy pontifications) “what this all means.” The problem lies knowing whom to trust. There is a total “information war” afoot. Sitting in Greece for the week before my arrival, watching Russian TV hold forth on “MOB RULE” in Ukraine (this after a period of denying that anything in particular was even happening), I could read the “slant” fairly easily. Other outlets were a bit more difficult. But insight into the spiritual significance of these unfolding events, I knew, could only come directly, not second-hand.

I didn’t come seeking the “Christian view” of current events. Quite the contrary, I find that viewpoints which totalize and spiritualize a complex range of questions under the banner of “the biblical view” of a given concern to be of little help to the edification of honest disciples and little interest or help to those outside the Body. Instead, I wanted to grasp at the essence of this conflict, not its manifestations. Insofar as the experience of Ukrainian believers involves participation in a true opposition of evil versus good, then God’s presence at such a juncture might have a far broader application, since we are ALL involved in that battle.

Flying in, all of Eastern Europe was under blanket of frosty fog, all the way from Munich to Boryspil. As we taxied to the terminal, newly constructed for the recent EuroCup football championships, the dusty snow blew and swirled across the tarmac beneath the sullen gray skies. The temperature was -12C. There wasn’t a single indication that anything was out of the ordinary, except, perhaps for the cold.

As I headed for passport control, I rehearsed at least a half-dozen responses (in English? in Russian, spoken well or with feigned incompetence?) as to imagined questions. The border guard presented me with one question only, and an obvious one at that: With my passport in his hand, he looks up and asks, “You are American?”

My host Vitya tells me warmly, “You really have not come at a good time.” You would have to know Ukrainians to know how words like these could be spoken honestly and warmly. His hospitality was not in question, but he noted that the Rada was still in session and thus, technically, could still initiate a “state of emergency” – a certain formula for civil war, at best. That being said, I was welcomed and truly felt at home. And I joined the conversation that took place, in fits and start, around the table with cups of tea close at hand. 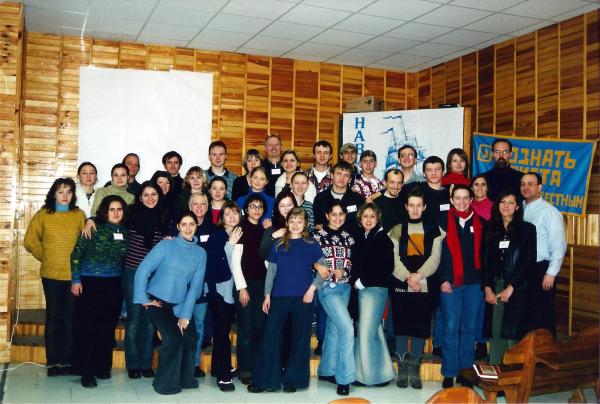 10 years ago. Navigator conference outside Kyiv.

These folks are wonderful young Ukrainian people who love God, their country, their family, their heritage, and who want desperately to just have the real hope of a dignified future – if only for their children’s children – remain as an even theoretical possibility. These are people in whose lives we invested a lot of time doing what church folk call “discipleship.” But now the task of living and working and building a family in a time where the daily headlines spoke of disaster for themselves and all they loved had fallen to them. As I spoke to these and other friends I wondered whether my “relational capital” would lead them to ask me for any “answers” I might have for them. But they knew better than that.

What I did realize was how important it was that I hear and appreciate their viewpoints, to understand how it felt to live life in their skins, in their relational context and all that went with it. These were people whose motivations I knew and respected, and who had at least one family member present on Maidan at each and every “national assembly” that had been called since November. These brothers and sisters are the fruit of our mission. And now I had come needing to learn what only they could tell me. I needed to hear how they – as they tried to “keep in step with the Spirit” while being under attack by those who had taken oaths to defend them – saw the path before them.

As much as I wanted to confine my focus to “the spiritual,” I realized that, in order to truly empower them, I had to accept that things were just not that simple. Black and white terms like “evil Berkut” or “hired thugs” or “terrorist extremist revolutionaries” or “corrupt police” or “far-right or neo-Nazi agents provocateur” were everywhere… but, in reality, nothing was that simple, nothing was pure. Their quest is for a just solution, not a simple one.

They had lived with incompetence, greed, rapacity, duplicity, venality, and injustice all their lives. They came to faith and have grown toward spiritual maturity in such a milieu. But this was something different, not just quantitatively but qualitatively. With the escalation of the tactics on the street had come an intensification of the sense that there was an Evil of a Very Real Sort at work, of a sort that only good could defeat… Living in a geopolitical tinderbox, they still sought the Lord.

By the end of the last cup of chai, despite many raised and unanswered tactical, practical questions, I had discerned four threads in this conversation:

So we have hope, but of an outrageous sort, one far beyond ourselves to realize.

The Rada had adjourned for the night. There would be no war tonight. We could sleep in peace, and awake to discuss where we would go in light of what the next day brought. We knew that all these things of which we speak need to find real-life expression in order to make any difference. It’s not going to get any easier…