I trust you’ve been following our line of thinking over this series of posts. They really do string together, and I will complete the series with the next one.

The “argument,” such as it is, started with a bit of “deconstruction”: First, Disability is NOT something that is inherent in the bodies or brains of individuals (that are damaged, 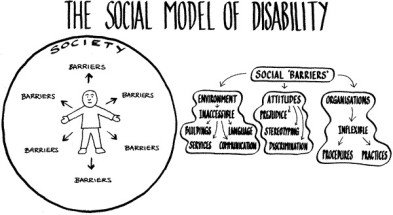 incomplete, inferior). We also noted that it is NOT true that “we’re all disabled,” despite well-meaning statements to the contrary. On the contrary, the case was made, it’s probably better to understand disability as being “socially constructed.” It is WE who mark or brand people as “disabled.” And the result of this marking is marginality.

A condition which is disabling in one time and place, may not be disabling in all other times and places. A historical example might be the ways that Native Americans viewed people that we would today consider as “disabled” through a different lens, that of “role in community.” (The first chapter of “A Disability History of America” relates in great detail the ways in which Native Americans, prior to the arrival of Europeans dealt with different forms of impairment… pretty much uniformly without any conception of “disablement.”) A current example of how context affects whether impairments might or might not be “disabling” might involve people whose visual impairments would almost certainly have been disabling at some point in the past are now able to “live normal lives” with the help of contact lenses or eyeglasses.

So here’s a thought experiment – think of a “disability” – whether a particular condition or impairment that you (or we) consider to be “disabling” or a particular person (concrete or stereotypical) that you perceive as “disabled.”  Can a world (or a “society”) be imagined in which that particular condition or person that you have in your mind is NOT “disabled,” but is valued, appreciated, perhaps even more than “the average bear” (as Yogi would say)?

Like Babe Ruth or other vintage baseball pros having “hunchbacks” follow them around because “they would bring them good luck.” Or we might imagine a world in which people jostle for position to help someone who can’t move, because of what they (believe they might) get from doing so. Consider how many people sincerely value “Outsider Art”. It’s not hard to picture a world in which those called “mentally ill” in ours are valued and embraced as 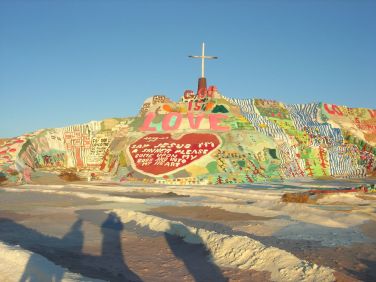 “visionary,” even “revelatory”… or just plain appreciated because the sounds they make (or hear), the music, the rhythm to which they move, is just “so funky.”

What about the “extreme cases”? People with severe intellectual disabilities? Persons with advanced dementia?

We might think it more difficult to imagine a world where such persons were not seen as disabled. But think, for a moment, about why that seems to be the case. Once again, our perceptions need to be understood and challenged. What do we perceive as giving a person “worth” or value… isn’t it typically, at the surface level at least, a perception that they can “do something” for us (like bring us good luck at the plate)? 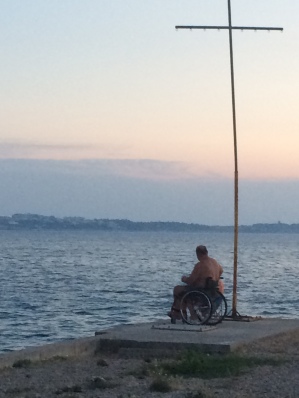 What if the value of a person is NOT limited by what I can “receive from” them (in any sort of transactional sense). What if the value of a person is truly seen only in a social setting, “in community”? What if “those we think are less honorable” are treated “with special honor” (1 Corinthians 12:23) and the entire body is built up as a result? What if that’s what makes some people “indispensable” (1 Co. 12:22… an epithet I would not apply to myself). Or as Jeff McNair simply states, “If one learns to love people who are hard to love, everyone else becomes much easier to love.”

What are we really talking about here? What people can do for us? Why do we think of such cases as “extreme” anyways? Because we don’t see what comes back our way? Is that really what it means to love, to be a friend? Certainly it is within us to imagine that such people can valued because they show us how to better love everyone else.

So, at least in theory, we can entertain the hypothesis, that there does not exist a condition that gets the label of “disability” for which we cannot also envision a “world” in which the same state or condition does not receive such a label.

If that is true, or insofar as it is, changing the “context” can change reality.

This post is the fifth of a series, which begins here. It concludes here.