As we think back over “notable events of 2012,” one particular event stands out. The Flood. 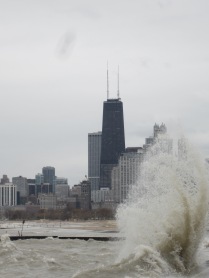 Superstorm Sandy walloped a lot of the East Coast… but didn’t even drizzle on the holler. (We were in Chicago for it… feeling it at a distance!)

The Big Event at The Mill didn’t even make the local papers… but it taught us a lot about the environment in which we live, lessons for which we are still paying.

On Saturday evening, March 24, Liz told me on the phone about the gathering storm clouds. I was in Hong Kong, getting ready (on Sunday morning) to head home. I responded (via Skype) that the radar looked like nothing I’d ever seen before… perhaps she’d want to head for that proverbial “higher ground.”

I had a 16-hour flight back to the States. In that 16 hours, the landscape of the holler underwent a massive transformation. Apparently there was a big “micro-burst” of rain just upstream… our creek drains thousands of acres of land… some estimated 3-4 hours of rain at 4-5 inches per hour. It all became “water over the dam.” Our calm little creek became a raging torrent. At its peak, it was several hundred feet wide. Our driveway (which a team from Trinity Bible Church in New Jersey had just helped to refinish) was under ten feet of swirling torrents of water. Pieces of trees, left from clear-cutting operations upstream, as large as small cars littered the bank, some a hundred feet or more from the creek’s usual bank.

The newly-repaired driveway was left under more than 50 tons of sand, deposited by the flash flood. We couldn’t get a car within 250 feet of The Mill… the sand was piled up in waist-deep dunes. All our tools, along with the plastic locker in which they were stored, were taken. All our boots, antique barrels, chairs… all swept away. As recently as last week, we were still having variations of this conversational theme: “Hey, where is Thing X? Anyone seen it?” “Oh man, I think it must’ve been taken in the flood.” The rug which ran the length of our porch wound up a few hundred yards downstream, about 30 feet up a tree. It’s still there. 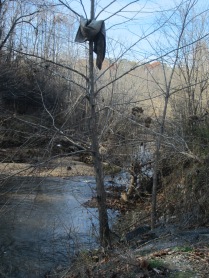 The deck was severely damaged, requiring extensive repairs. Our propane tank had floated away… but was 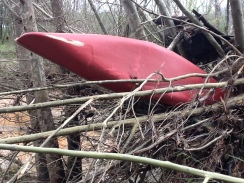 miraculously snagged on a stump which kept it from doing any damage. A canoe tied up behind the Mill was found across the creek, 20 feet up a tree. The county road running by The Mill had been stripped away down to the bedrock. What used to be the road was now in the midst of the creek, changing, perhaps forever, its flow. 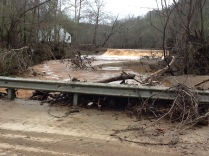 I realized how close we had come to losing almost all our possessions in the 16 hours I was on that plane home. By the time I returned to the holler, the flood had come and gone… but the devastation remained.

Our friends gathered around to help us assess the damages, to begin to sort things out. I was asked several times, “How come you seem to be taking this so lightly? I’d be freaking out!” My only response was, “It’s pretty frightening stuff, the power of water. But I know who sends the rain and the flood. It’s the same Person who very clearly put us in this place. I know Him. And I trust Him… He hasn’t let me down yet, so there’s no reason to panic here.”

And “the house on the rock stood firm” – The Mill was still standing. Though we needed to check things out to be sure it was still safe. It was. None of the beams were damaged. They all held. How could we be so sure? In the weeks before, a good friend (with skills!) had been investigating the beams. Finding the weak spots and cleaning them out. Shoring them up. Injecting them with some fancy epoxy, so that they would not further degrade over time; they are pieces of wood over 100 years old!). Shielding the weak spots from potential damage. He had spent enough time looking intently at every supporting bean that could pose a problem… and working on them. So, once the flood had passed and I’d returned home, we didn’t have to wonder what effects the flood had wrought on the beams… because we knew each weak spot well. And the efforts to strengthen them worked. It’s impossible to say, but it’s entirely likely that those efforts saved The Mill – only God knows how many of those car-sized trunks bounced off the front beams of the building as the water swirled around them. But had those old pillars not been shored up, we likely would not be where we are today.

We often figure it’s good to “accentuate the positive,” and not to dwell on problems. Had we simply sat on the porch, watching the stream flow by, framed by the old beams, and left it at that, we would have had more pleasant moments. It was neither pleasant nor particularly interesting to discuss these beams, their weaknesses, the potential risks and the steps that we could take, if we wanted to, to reduce them. I’d rather sit and sip a cool one and relax… 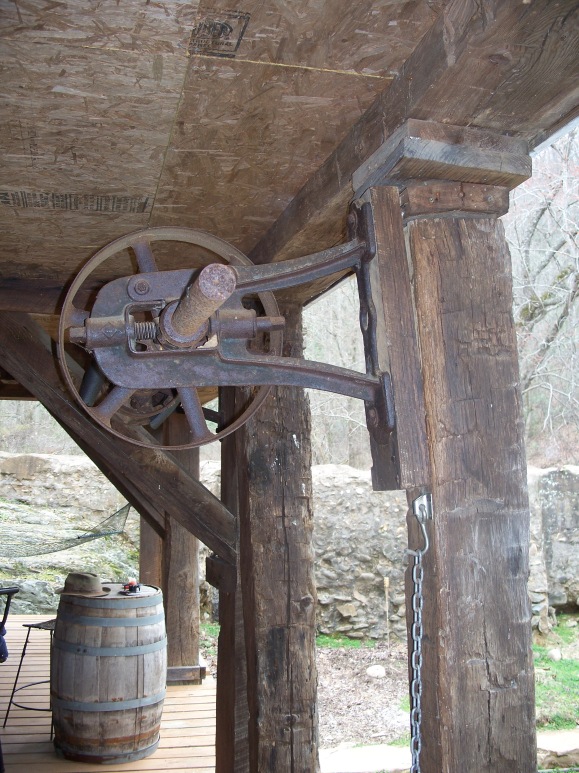 But, in this case, the wisdom of attending to “treating the beams” was vindicated.

We’ve been struck by how this principle has great application in our lives. Not only is “an ounce of prevention worth a pound of cure,” but there are forces around us that can, at a moment’s notice, wreak havoc on our lives. We can’t stop the rain, but we can develop a relationship with Him who holds the powers of creation. We can’t hold back (or even predict) the flood, but we can take stock of our own vulnerabilities… and attend to the work required to strengthen them. What areas of your life or vocation require attention? Are there “beams” in your life that you’ve avoided “treating,” but which need to be strong for you to “go the distance”?

Our mission work in Europe (and, by extension, its connection to The Mill) is possible because we have a team of ministry partners who pray for and contribute financially to this work. We have, for years, persevered in ministry because the team we put together over 15 years ago was so faithful. These people – and their gifts and prayers – have been the pillars upon which years of service have stood. And we couldn’t count the lives and communities that have been irreversibly changed as a result. But, as these “pillars” have aged (along with us), we have realized that (re)building our ministry support team is just such a critical task. It’s not a particularly exciting one… but one which is essential to the ongoing vitality and sustainability of the work to which God has called us.

In that spirit, as we look to the close of the year, we are praying for people to respond to this call: to join us as we look toward the New Year, ready to build healthy leaders in community who are committed to working for the revitalization of the Christian community in Europe by applying the Good News holistically, particularly as it relates to the life-situation of those on the margins. If you would be interested in making a tax-deductible donation to our ministry, please visit this secure site.

Either way, the porch is still here – and it’s more level than it’s ever been. We look forward to many conversations – and a few quiet moments – together… “Lord willin’ and the creek don’t rise…”